Okay…this post has nothing to do with a lack of mashed potatoes.  I just love that line.  It’s become a staple of M and my faux-complaining about, well, really any meal–not just Thanksgiving.  Not that we want mashed potatoes at every meal, but anyway…

A friend recently called me out for not being an ingrate. This via a Facebook post, wherein I was responding to her efforts at working through the 24-days-of-gratitude challenge, or whatever it’s called when you note something you’re thankful for every day throughout November until Thanksgiving. I commented that I had been planning to do the same, although “planning” is perhaps too strong a word…it had occurred to me that I could engage in that challenge, and that I had done it in the past…although, maybe not in November. I might have just chosen 24 or 25 random days, having missed the point entirely…or maybe having expanded the point out in the most glorious of ways by refusing to confine my thankfulness to some specific stretch on a calendar. At any rate, not being an ingrate perhaps takes away from these annual posts, but at least somebody gets the point…that I’m not really an ingrate.

To those who don’t know me, it might be easy to imagine I am such. I enjoy complaining–embrace complaining–as an art form. It’s performance. It’s fun. It’s pure joy, garnering accolades and laughs when in the right company—and disturbed, ‘are-you-okay?’-furrowed-brow looks when in the ‘wrong’ company.

You see, when a big portion of your work is devoted to listening, absorbing, and redirecting the misery of the world, complaining is life-saving, life-affirming, the stuff of thanks.

It’s all a matter of perspective. Much of the ‘wrong’ company involves people in my same field, but with a vastly different view of how we need to approach life in order to receive the blessings of thanks, or the thanks of blessings, or whatever life-denying positivity they think will cancel out the darkness of the season…that same darkness our ancestors feared was the impending end of time. 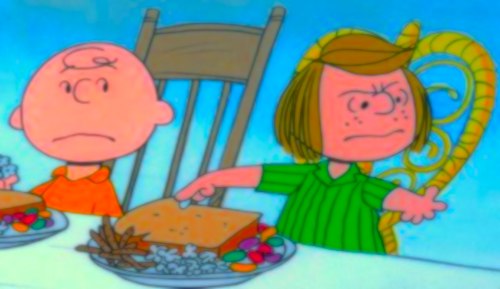 When I set out to write this annual exercise in ingratitude/gratitude, I tried to think of a good Thanksgiving story from my past.

As I’ve noted in previous ‘ingrate’ posts, I have very few specific childhood memories of Thanksgiving. It was just some day off from school—two days actually–where things were, perhaps, much worse than school…having to put on church clothes only to have a meal that wasn’t particularly interesting.

Perhaps my emotional deficit around Thanksgiving is that it comes between my own balls-out/dress-up/mess-up-the-house-with-monster-decorations/get-candy enthusiasm of Halloween, and the hyper-sentimentality/religious significance/songs/smells/twinkling-lights/PRESENTS!! of Christmas.

How can Thanksgiving compete with that? New Year’s doesn’t fare all that well in comparison, either. Perhaps as a child, I was too close to family, too frequently in contact with them, to realize the value in being able to meet up yet again.  Getting together with family is something that’s become far too infrequent, with siblings spread out across six states, and cousins across at least four more that I know of.

In the absence of the frequent family gathering, I have grown to love, if not the sham history of the holiday, then what the idea of the holiday represents…coming together, helping each other out, recognizing what we have, and why all those elements are potentially so great.

Again this year, my immediate family and I are going out to eat for Thanksgiving–at a favorite restaurant where we’ve enjoyed Thanksgiving dinner before. Again this year, it is a function of our work schedules. That is to say, we could request time off, but, as with every year of the last decade, I work in a 24/7 operation, and M works at a school that caters to doctors (who work in a 24/7 operation). So, we pick and choose which holidays to celebrate more or less enthusiastically.

M was insisting she wanted to make a Thanksgiving meal this year. When the idea was first proposed, I went along with it. Then, at some later time, the kid and I ganged up on her, and pointed out that she had to work the day before, and the day after, Thanksgiving, as do I.  Well, actually, I’m working the day before, the day of, and the day after Thanksgiving, which means a portion of the argument rested on what a pain it would be for me to help do the shopping and cooking and all that, while still attempting to get any sleep–have I mentioned that I work nights?  Coordinating the menu, the purchase of the food, and the preparation of the food, was far more work than we were all ultimately prepared to do, all for just the three of us.

We managed to nail down Christmas plans that would allow more time before and after that holiday to indulge in such excessive amounts of preparation and work, and still get in a fair amount of relaxation, all in the company of family. I’ll hold to my feeling that thanks shouldn’t be a chore, and that holidays should be centered around a desire to celebrate, rather than an obligation to go through the motions of celebration.

I am incredibly thankful, once again, that I have the great fortune to pay to indulge in the hospitality provided by others. And once again, I intend to tip with guilt-laden generosity.

Wherever you are today, I hope you have reason to recognize your situation as one of great fortune as well.