Check out this picture: 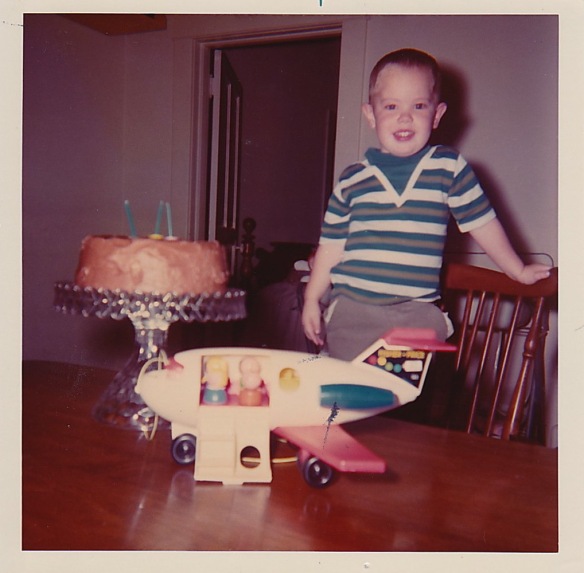 No, no, I don’t mean the fetching haircut accentuating the perfect, potato-esqe shape of my head. That haircut was a dad special a la 1971—the hairdo all of my brothers and I had by dad’s decree. I’m thinking a “1” setting on the clipper.   Quick and easy, nice and tidy.

And, no, I’m not talking about the fashion, although I am pretty damn suave in that dual-layer, v-neck with mock-turtleneck, combo. Or, more accurately, I guess that would be a mock-mock-turtleneck, given that it’s not even a real mock turtleneck, but just the neck and a little bit of the chest of a mock-turtleneck sewn into a shirt. The dead giveaway is that the striped part of the outfit is short-sleeved, and who ever heard of a short-sleeved mock-turtleneck? Right? The dove-gray slacks perfectly compliment the olive stripes sandwiched between the ocean blue stripes that match the mock-mock-turtleneck.*  Still, I’m thinking that this getup would definitely make it into a top ten list of my all-time most fashionable outfits, such is the limited ability I have to dress myself.

No, I’m not even talking about the gift, proudly displayed—that Fisher Price Little People airplane—the red winged version. Pure brilliance of design, down to the weird, yellow plastic string tied to the front so it could be pulled along the ground, the pilot, head flipping back and forth, ever vigilant. Of course, the pilot eventually wanted to break free from the tarmac, and I obliged. The plane today (still in a closet of my mother’s home, or perhaps in a box in the “workshop” of my house) is missing the door, and a chunk of one of it’s horizontal stabilizers, courtesy of a few attempts over the years to see if I could get the thing to fly properly. Perhaps such confusion over aerodynamics is tied to why I became a therapist, and my older brothers went into the “hard sciences.”

Anyway, any other guesses as to why the photo is so amazing? The cake? Well, I did reference it in the title of this piece, I suppose. And it is pretty impressive—home-baked, double-layer, chocolate frosting on devil’s food, set atop a shimmering, crystal cake stand, the candles, playfully askew. But, that’s not it, either.

Are you ready for it? The big reveal?

What’s so amazing about this picture is that it was taken, by my mother, one week after my father’s rather unexpected death. That the picture is so normal, that it fits in so perfectly with the small parade of yearly birthday pictures of all of my siblings and me (all featuring the birthday kid, with a cake and a gift, either posed alone or with that year’s cadre of siblings) is what is amazing to me.

My mother managed, seven days after what I assume was the absolute pinnacle of the sadness and distress in her entire life, with that sorrow still hanging heavily over her and the entire family, to make a cake, wrap a gift, and provide me and our family with some small bit of normalcy. I can imagine my mother just realizing that it was her duty to do so, that she signed up to have kids, and, well, that’s what you do when you have kids…you soldier on and keep things as stable as possible even if everything just collapsed right out from under you.

I have always wondered (and I suppose it wouldn’t take all that much to ask, but since mom will be reading this, I’m sure I’ll get an answer of some kind) if that plane was purchased before or after my father’s death…since it wasn’t until after my father’s death that what would be my first plane ride—out of Nebraska, and on to Oregon—would even be a thought. Was it a gift meant to help prepare me for that trip, or was it merely a coincidence? Was I fascinated with planes at the time? Was it just kind of a cool thing my parents thought I would like? Or was I manipulated by television commercials telling me I wanted that plane?

As a bit of an aside, here’s a Fisher Price commercial from 1972, including the plane, and narration by Dick Cavett. The gentle pitch to parents (although the images would definitely grab the attention of children) is rather quaint now, compared to todays ads telling kids that they MUST HAVE THESE TOYS NOW!!

At any rate, one thing I never noticed in this photo until I scanned it and really looked at it earlier this morning—is that the door behind me opens onto my parents’ bedroom—or what had recently become only my mother’s bedroom.   I can clearly see the same bed that my mother still sleeps in through that open door just behind me.

Not long ago, I told my mother that one of my earliest memories was of going into her bedroom (I believe after being told to leave her alone) and finding her lying on her perfectly-made bed, crying. I asked her why she was crying. I don’t recall that she said anything, only reached out to me and put her hand on my arm, which I had rested on top of the bed. Soon thereafter, somebody—a brother? Some other relative? A family friend?—stepped in and ushered me out of the room, closing the door behind us.

In my mind, the setting for this memory always defaults to our house in Oregon, because that is the only house my family lived in that I consciously remember. But seeing that, in this photo, the bed is covered in a white bedspread, just as it always was in our house in Oregon, it is easy to imagine that same scene playing out here, in the Nebraska house, although to ‘block out’ the scene would require flipping certain elements in different directions. I can definitely imagine that the dining room furniture in the photo here would have provided me with some measure of blockage between me and whoever (may have) told me to leave my mother alone, just as the short distance between our dining room and my mother’s bedroom in the Oregon house would have given me that tiny bit of time to do the same. Nebraska in September (probably more likely) or Oregon in November, it makes sense to me either way.

Getting back to the specific elements of the photo, certainly, other mothers have done the same as my mother did, in similar circumstances, just as other mother’s have fallen apart. Certainly, plenty of fathers have also had similar experiences following the loss of a spouse, and the effort to carry on and keep things stable for their children (or of falling apart). But it’s my birthday, and if I want to tell my mom she did an amazing thing—then I get to do that.

So, happy birthday to me, and thanks, mom!

*Color matches approximated using Ingrid Sundberg’s “Color Thesaurus” which can be found here: http://www.boredpanda.com/color-thesaurus-char-ingrid-sundberg/ .  If you have suggestions for better labels of the colors in the photo, feel free to submit them in the comments section below.

2 thoughts on “Happy Birthday to Me II: Contemplate This on the Cake of Woe”