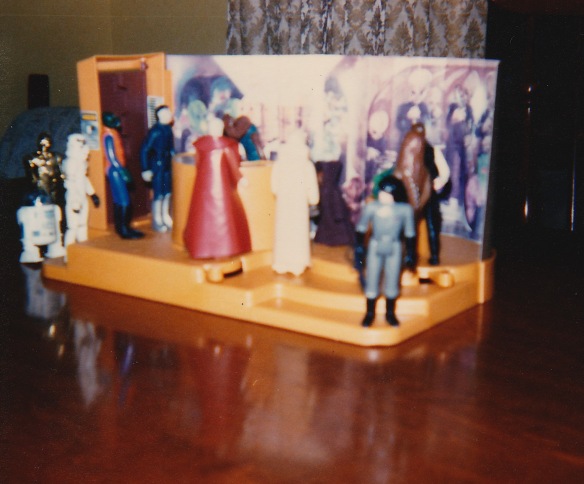 After a week at camp…Mos Eisley Spaceport Cantina, where the droids wait outside.

There’s probably a photo somewhere of this Mos Eisley Cantina playset (and, yes, nerds, that is a blue Snaggletooth figure in there) with me posed proudly behind it. I was going to joke that my mom took the picture of the playset without me because she got tired of waiting for me to get out of the bathroom. You see, I had been at Outdoor School for the previous week and was emptying my bowels of a week’s worth—well, five-ish days worth—of camp food, over the course of several emergency trips to the bathroom.

Anyway, I was going to joke about my absence from the picture, but the truth is, my mom was really cool about letting me stage a scene with my new toy and take a picture of it. Keep in mind that this was back in the days of film rolls, which were a bit spendy to buy and to print, and with no guarantee that the pictures were going to turn out. You couldn’t just delete the file and take another. No, you snapped those precious pictures carefully, over the space of however long it took to complete a roll of 20 or so pictures, then popped the roll out of the camera, took it to the store and waited days for the lab to process them. The stamp on the back of the photo shows that it didn’t get developed until April of the following year.  And, as you can see, I didn’t quite get the focus right.

Don’t get me wrong. The story of the excessive time in the bathroom is true. As I said, it was the week of Outdoor School at Camp Yamhill—meaning I had been away from home on my actual birthday, which fell on a Thursday that year. They brought us home on Friday.

Outdoor School was ostensibly to get 6th graders out into the wild to learn about the miracles of nature all around us—although I can’t remember a single part of the curriculum, aside from a lesson on erosion.  The lesson was memorable to me for what we didn’t learn, or, perhaps for how we didn’t learn it.  the camp counselor took us out on a hike, stopped along the trail by a fairly steep embankment that rose up and away from us, and then emptied some water out of a cup onto the embankment. The small group I was with had no idea what the counselor was getting at by showing us this.  And he got really annoyed when one of our group asked if he could show us again—because the counselor had already emptied all the water out of the smallish drinking cup he’d carried all the way out to this point on the trail.

Being something of a teacher’s-pet-type, I really wanted to be able to answer the counselor’s questions. But also being of a perfectionistic bent, I didn’t want to offer up mere guesses that may have been wrong. I finally said something, in response to him asking me a direct question. That led to him asking me follow-up questions. But I just didn’t know the answers. I hadn’t read up on erosion prior to the hike, and wasn’t particularly familiar with the concerns involved. Ultimately, exasperated at our lack of inquisitiveness and inability to follow the lesson as he presented it, the counselor just told us the answers we would need to fill out the worksheet on erosion that we had brought along in our camp folders.

To be sure, I have scads of memories of the week—just not about the stuff we were sent out there to learn.

For instance, there was the terrifying moment when, during dinner one night, they announced the birthday girls and boys for the week. Those few of us were supposed to go up to the front of the dining hall and stand there while the rest of the campers sang “Happy Birthday.”

I froze, despite the heat of a deep blush rising in my face.

Painfully shy, even around most of my own classmates, we were at camp with sixth graders from multiple schools—people I had never met before, and would experience only for a few short days, and in a largely cursory manner. My tablemates urged me to go bask in the attention. One of the female counselors came around in an effort to weed out the birthday campers. But the counselor from my own cabin, who went by the name “Lightning”—a name I had previously associated with a horse from Nebraska—quietly waved her away and shot a look at my tablemates, with the message to leave me be. I was immensely grateful in that moment—until a sense of regret crept in at my deliberate avoidance of what was supposed to be a fun and kind gesture by the camp organizers.

But there were plenty of things I dove right into.  We made “hobo stoves”—unthinkably unsafe tin-snipped coffee cans, with cardboard tightly rolled into tuna cans and set ablaze—to cook hamburger patties.

There were the camp crafts, and camp games—and, hey trendsetters with more energy than me, if there aren’t already adult Capture the Flag leagues, somebody needs to get on that.

And then there was Alan—a camper from another school who landed in the same cabin I was assigned—the mighty brown pelicans (all the cabins were named after endangered species)—and who almost immediately got into an argument with one of my classmates. That escalated into a physical fight by Tuesday, which resulted in a cabin-transfer for Alan. The loyalty of sixth-grade boys being what it is, I, of course, painted Alan as the villain in the situation. But regardless of my perceived need to choose sides, it was alarming and confusing for me to see two complete strangers develop such an immediate and intense animosity for one another, over essentially nothing, and hang onto it with such energy.

There were the camp sing-alongs including the camp theme song, which, as far as I remember, consisted solely of repeating “Camp Yamhill” over and over again at varied rhythms and pitches.

In perhaps the ultimate shot at provoking horrible embarrassment in the campers, each cabin group had to take turns performing skits on different days. We, the brown pelicans, did a skit so profound and accomplished that I can’t remember a single thing about it—aside from various cabin members arguing about the details of the skit until the absolute last minute—details still undecided as we took the stage in a swirl of hushed, urgent, and contradictory orders given by multiple self-appointed artistic directors. ‘Thank God,’ I thought, ‘we are not being graded on this.’

And there were the campfires each night—where I frequently caught myself staring through the darkness at one or the other of two crushes, there faces illuminated by the yellow-orange light of the fire, as acoustic-guitar-toting counselors led us in songs. I’m guessing we sang classic rowboat songs, like “Michael Row Your Boat Ashore” and rounds of “Row Row Row Your Boat.” But the song we sang at camp that stuck with me most as I reached the landmark of wisdom that is age 11, was Joni Mitchell’s “The Circle Game.” A counselor or two would sing the various verses, campers joining in on the chorus:

“And the seasons they go round and round

And the painted ponies go up and down

We’re captive on the carousel of time

We can’t return we can only look

Behind from where we came

In the circle game”

…which would be a lovely and poignant place to end this post if I didn’t feel obligated to point out that, not actually knowing the title of the song, or the correct words, for years I sang that last line as “The circle again” as well as substituting “captured” for “captive.”

So, on the first day of camp, shortly after arriving and heading up the hill to get settled in our assigned cabins, I walked across the open space to the communal bathroom. Multiple other boys were cycling in and out. I procured a stall and began to relieve myself. A sudden commotion interrupted the peace of my flow, as an eruption of shouting, laughing, and the banging and slamming of the (lockless) door rocked the stall adjacent to mine.

From the various yells, I quickly discerned that a classmate—the occupant of the next stall over—was now the subject of a sneak-attack photo.  The horror!  Captured on film in the act of pooping!

At that very moment, already wary of having to use public restrooms as a general rule, and arguably allergic to the very thought of actually sitting on a public toilet, my sphincter closed itself off to business for the remainder of the week, lest any other bathroom paparazzi (pooparazzi?) turn up.

Now, the human body can do some amazing things, especially when prompted by fear. I have no recollection of feeling any ill effects over my defecation-avoidance scheme. It’s possible I may have made my way to the toilets once or twice during low-traffic times. Being a teacher’s-pet-type generally meant an absence of suspicion when requesting to use the bathroom.

Still, I was way off of any regular routine I may have had, so much so that by the time I made it back home, despite my tremendous joy and excitement at receiving the Mos Eisley Cantina playset, what may have been the best gift that year–well, for at least a few hours–was immediate access to a full bathroom, complete with a locked door, as my sphincter re-opened for business with an hours-long, albeit sporadic, inventory liquidation.