Lowes decided to announce its rollout of Sherwin Williams’ line of “HGTV Home” paint by crafting an ad that plays on popular ideas about some of the most well-known artists in history (and pop culture), each jealously challenging the notion of who is “the most legendary name in paint.”

But Leonardo da Vinci, Andy Warhol, and Michelangelo all do.

Vincent van Gogh just comes across as…well, you can watch it here:

Get it? It’s funny because you think he’s saying “what?” because he cut off his ear. But then you realize it’s actually funny because van Gogh is suffering from psychosis or whatever would make him talk to a pigeon. 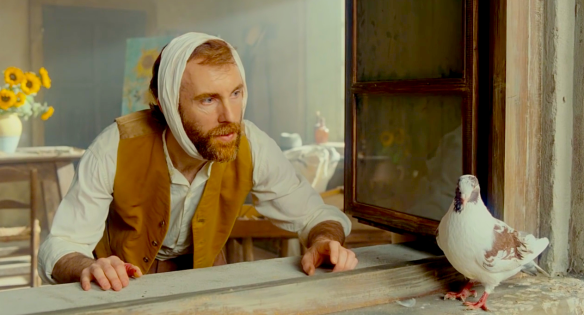 He talks to pigeons. How clever.

Of course, nobody diagnosed van Gogh with a particular mental illness during his lifetime, particularly not from a current understanding of mental illness. Perhaps the most popular theory of van Gogh’s troubles is that they stemmed from Bipolar Disorder. Whatever the case, eventually van Gogh died of complications from a self-inflicted gunshot wound, following numerous other episodes of emotional difficulties and self-harm.

I want to be clear that I don’t have any particular axe to grind with any of the businesses in question (even if I should for one reason or another). I shop at Lowes regularly.  And even though Sherwin Williams has that terrible “Cover the Earth” logo,

all of the paint we’ve used in our home has come from our neighborhood Sherwin Williams store, except for the paint in the upstairs bathroom, and the stain on the deck, which we got at Lowes. And I watch HGTV (and the DIY Network) enough that M wishes I would just get off the damn couch and make our house more beautiful (or at least just quit talking about all those projects and do them).

Still, it’s disappointing to see that the big punchline for the combined Lowes-Sherwin Williams-HGTV commercial involves mocking, specifically, somebody who suffered from mental illness, and, more generally, the idea of psychosis, particularly given that the commercial was rolled out at the beginning of Mental Health Awareness Month:  NIMH’s “Mental Health Awareness by the Numbers”

I suppose I could also point out that all of the artists in the commercial are white males. But given how the myriad options for art “jokes” involving white male artists were handled, I don’t have a lot of faith that a woman artist, or a non-white artist, would have fared much better when reduced down to a humorous reference that might be commonly understood.