We’re breaking records for October rain here in this part of the world–as well as having just generally rotten weather–so much so that I kept blowing off putting up the decorations.  I still haven’t gotten the lights set out–the big LED lamps that illuminate the whole Halloween display.  I’ll get to that as soon as I’m done posting this…and well before I dry out from having just gone out to hang the new decorations.  (Yep, taking it down to the wire, despite Halloween and tricks and treats falling on a school night plagued by terrible weather).

Both of the new pieces are based on drawings the kid did many years ago, when she was about five.  Of course, there are modifications.  I’d post images of the source material, but I didn’t ask her permission for that.  Maybe later.

So, the ten-armed creature here (which was a twelve-armed creature in its original form) is a random monster from the days when the kid would sit around drawing picture after picture, or very involved pictures with numerous characters.  So far as I know, it has no name, and isn’t any particular kind of beast.  I always envisioned it as floating about, or perhaps ‘swimming’ through the air.  At any rate, it was made to hang from our plum tree.  It’s about six-and-a-half feet tall.  And, in case you’re wondering, yes, cutting something like that out of a single piece of 4′ x 8′ plywood is rather time-consuming. 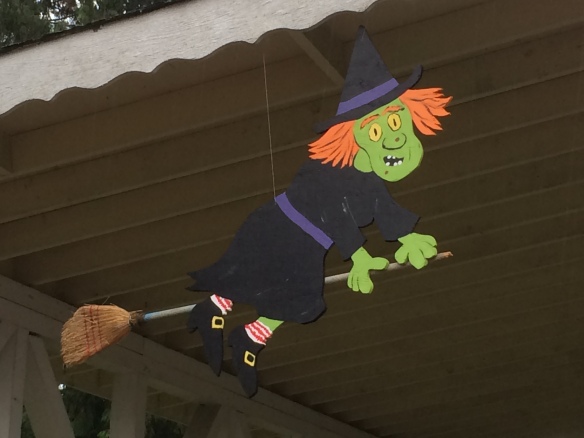 With an actual, aged broom…y’know, for realism!

The witch here was taken from my favorite material object in the entire world…a construction paper haunted house that the kid made all those years ago, with numerous drawings of monsters glued to the outside.  Her witch was standing, not flying on a broom.  And I added the gym socks.  But I think I retained the spirit of the original pretty well.