You can read that piece here: Grisham on What Makes a Real Pedophile

I would add to Goldstein’s piece that, developmentally speaking, if you think 16-year-olds are capable of making rational decisions about being ‘porn stars’ then, well, you’re wrong. Look into brain development, and when people actually become capable of making decisions about the long-term consequences of their current behaviors. Add to that the problem that sixteen-year-olds, legally speaking, can’t enter into ANY contracts (even if they can legally consent to sex) and, well, it’s pretty cut and dry that 16-year-olds (and minors of all ages) in pornography are just plain being exploited, as well as frequently being abused, drugged, threatened, or otherwise coerced.

In the time since the publication of the original piece, Grisham’s friend has come out to say that his treatment in the legal system was not unfair, that he deserved what he got, and that he should have never done the things he did. It also came out that, unlike what Grisham said, his friend did not just accidentally look at some 16-year-olds who looked like adults, but that he was actively participating in the exchange of child pornography, including files involving children as young as 12 (who presumably did not look like they were 30).

Much has been made about why Grisham would have given such a distorted view of what happened with his friend. My guess is that he didn’t know exactly what happened, and that he was going off of an explanation his friend had probably given several times to family and friends when his legal troubles started. That explanation probably went very much like Grisham explained it: ‘I was drunk. I was unhappy. I clicked on a link that I didn’t realize was child pornography.’

Not surprisingly, when friends and family of an offender first hear of allegations of any kind of sexual misconduct, particularly when it falls into the realm of sexual misconduct involving children, whether that is “hands-on” contact or viewing child pornography, the default position is to not want to believe it. Likewise, the default position for the person engaging in the offending behavior is to not want to admit to it.

When offenders are “found out,” there are several stages that they often go through on the way to actually being able to own up to their actions. Very roughly speaking, those usually look like: 1) Nothing happened; 2) Something happened but it’s not nearly as bad as they say it is; 3) It was an accident/the victim did x first; 4) Something happened that is worse than I originally said, but really not as bad as they are saying; 5) Really, I have a pretty extensive history of this kind of behavior.

The offender, and those closest to the offender, simply do not want to believe that what happened actually happened, and often cling to that as long as possible, and often to the detriment of the victims of sexual abuse. 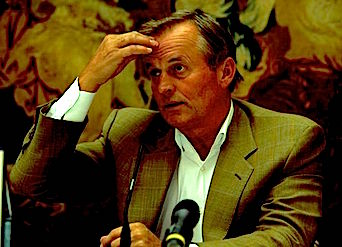 So, I’ve highlighted a few of the things that Grisham said that were clearly wrong and stupid when it comes to offenders. So, what did he get right?

Grisham’s words were rather careless. Citing old white guys in prison as a big problem is not really the best way to go about making a case. Old white guys in prison is about as big a problem as young white guys not being able to get into college because of Affirmative Action. In other words, relative to other systemic problems, it’s nothing.

But how do such limitations get put in place or enforced? In several states there are “sentencing alternatives” for sex offenders (and for people who have committed various other types of violations), particularly those who are not considered “violent offenders.” And, I realize the language is odd, but “violent offenders” are those kinds of offenders who, say, go after kids they don’t know or engage in physical violence beyond just the sexual acts they inflict on their victims, as opposed to “grooming” children that they are in regular contact with. Groomers, or non-violent offenders, tend to work slowly and patiently to get what they want from their victims. Violent offenders smash and grab and are a small minority of overall offenders.

At any rate, from what has come out, Grisham’s friend had no hands-on victims. And really, what’s the bigger punishment? Putting him in prison for three or more years, and then letting him out, all done, all paid for; or putting him in jail for less than a year, and then putting him out to go about rebuilding his shattered life, while under strict supervision and treatment guidelines?   Once on the outs, he has to get a job (probably not a high-paying attorney job as I’m guessing that door has probably closed), pay for whatever housing is available to him—which will likely be severely limited, be under the supervision of a Community Corrections Officer (CCO), and have to go to/pay for outpatient sex offender treatment for the next several years, potentially for the rest of his life.

At any rate, the sentencing alternatives cost taxpayers a lot less money, are just as effective from a treatment perspective. And, for the vindictive among you, such sentencing alternatives are plenty demeaning—loss of status and being under a harsh set of rules, with the threat of being bounced back to prison for violating those rules, is not something anybody wants to live with. And for those offenders who manage to maintain any kind of support network, or rebuild a new one, they get to go through the rather unpleasant process of explaining their offenses again and again, just so that they can build a group of chaperones, or at least informed contacts.

But since laws are generally written by politicians, and not for the purpose of doing what is most effective, but for doing what is most politically expedient/most popular, things like sentencing alternatives are created and used less and less frequently. No matter how much sense such policies make, or how cost-effective they are, lawmakers don’t want to be labeled as the ones who let sex offenders, even offenders with no hands-on victims, even offenders who are made to pay severe penalties other than prison time, out into the community.

But such short-sightedness means that more offenders actually get out of prison somewhere down the road, and with little or no supervision, and no organized checks on their behavior.  Grisham is right that there are better places for his friend to be, even if he was completely wrong about what his friend did, and what it meant.