And I have yet another follow-up to an earlier post regarding jokes about dads shooting their daughters’ boyfriends. For this entry, I’m looking at a recent commercial for the Buick LaCrosse, notable mostly for actually showing the abject terror of a threatened junior-high boy, and the irritated reaction of the daughter to her father’s insecure, childish behavior.

The ad shows a white Buick Lacrosse driving along as we hear, then see an adult male telling the radio to play multiple songs. The stereo instantly accesses the tunes, along with the information on the artists, which are shown in a big, color display on the car’s console, complete with album cover art. The songs include “U Can’t Touch This” by MC Hammer, “I’ve Got Eyes Everywhere” by T-Booth and the Sensations, and “Keep Your Hands to Yourself” by The Georgia Satellites.

Cut to a shot of a teen(?) pre-teen(?) girl and boy in formal attire, sitting at opposite ends of the back seat, the boy looking terrified. The girl, with a look of contempt on her face, says, “Alright, Dad, we get it.” 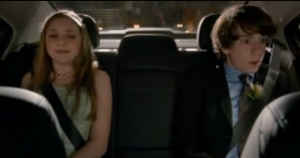 Gee, dad, thanks for setting such a low standard for the men in my life by threatening children.

The car arrives at a school, where a banner outside announces there is a dance happening. A voiceover says, “With Intellilink…” There is then a shot of the kids walking away from the car, the dad looking out the window, his arm resting on the bottom of the window frame, a look of nostalgic longing and dickish smugness on his face. Dad says, “Have fun,” the tone in his voice indicating he is proud to have possibly just caused a 7th grade male years of situational impotence. The voiceover continues, “…all your music is ready to listen to. Even if some people are sick of hearing it.” 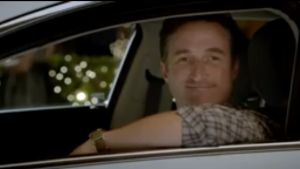 Dad fondly remembering the school dance where his girlfriend’s dad beat him senseless out by the dumpsters for letting his hands stray.

To anyone who gives it any thought, the commercial raises all manner of questions, like when the voiceover says “sick of hearing it” what exactly does that mean? How many times has dad done this before? And, really, what does that say about him that, one, he is allowing his daughter to go on that many dates when she’s clearly not old enough to be dating, and, two, that he thinks his 13-year-old daughter is constantly having to fight off sexual advances from the boys she takes to school dances?

Now, I’m not saying that kids having sex as young as 12, 13, or 14 is unheard of, but why is it that dad is so obsessed with his 13-year-old daughter’s sexual behavior? That’s more than a little…err…unhealthy. I mean, if dad’s so willing to imply that his daughter and her dates need to be schooled on not having sex while he is driving them to a dance, don’t you think he could’ve had a more productive conversation with his daughter about how to keep herself safe, and how to choose appropriate behaviors? And did he get a look at her date? The kid doesn’t exactly look like the type who’s running around seducing and impregnating his classmates (although I don’t want to stereotype—maybe he really can talk any girl into bed, or into a bathroom stall at a junior high dance, or whatever).

But anyway, let’s give dad the benefit of the doubt on the “sick of hearing it” comment. Let’s say that despite the commercial’s obvious, intended meaning, all it really meant was that your kids don’t like to hear the music you want to play in the car. I can accept that as a true-to-life situation for most adults, particularly those who are too insecure to allow their kids a few minutes of pre-func music while on the way to a dance.

So, how about we look at the music selections that are conveying this threatening message of “I’ll kill you if you try to have sex with my daughter.” As noted before, selection number one is “U Can’t Touch This” by MC Hammer. I’ll let the actual braggadocio of the song go (which has nothing to do with physical touching or sex) in favor of the heavily-sampled song underlying it—“Super Freak” by Rick James. Now was this some kind of sick joke suggesting that 13-year-old girls need to be kept in check, or just unintentional irony? The original Rick James song was about a woman who was rather well-versed in the further reaches of sexual behavior…”She’s a very kinky girl, the kind you don’t take home to mother.” I’ll leave it at that.

Selection number two, “I’ve Got Eyes Everywhere” by T-Booth and the Sensations, is a song (and band) so completely underground that it doesn’t actually exist…not that you’d realize it isn’t a real song from the few seconds of generic music that comes over the stereo. I’m guessing this pretend song had to be included because Rockwell held out for too much cash when Buick asked to use “Somebody’s Watching Me.”

Song selection number three, “Keep Your Hands to Yourself” by The Georgia Satellites functions as another entry in the unintentional irony category, as it is sung from the perspective of a guy trying to get his girlfriend to sleep with him—and it’s his girlfriend telling him ‘no’.

(Buick, call me. I can find tons of songs that might better convey the creepy message you want to get across—and from the knowledge base of a forty-something male who actually likes music).

And speaking of that…keeping in mind that I have no idea how Intellilink actually works…wouldn’t the better commercial involve the daughter and the dad having dueling song choices? (Well, for my comfort, let’s imagine the girl is several years older). Then we could get the girl throwing out some selections endorsing irresponsible teen/drinking/sex songs while dad tries to counter. It would make the boy’s confusion and fear marginally more entertaining…right? Maybe? Like this…

Okay, so my version of the commercial is still playing on the same stupid sexual stereotypes that inform the original commercial, and it would’ve cost Buick a lot more to get the rights to at least some of those songs, but at least in my version the daughter gets to give it back to the dad for being such a dick, and suggests that if dad is going to make assumptions about her behavior, she might as well amp up his insecurities. Try and exert all the control you want, dad. Ultimately you don’t really have any.

Now, if I can get all moralistic on everyone again…what is this commercial saying? I’ve already touched on how creepy it is that dad is obsessed with his teen daughter’s sexuality to the point where he would try to ruin a date for her. Beyond that, dad’s obsession with his daughter’s sexuality leads him to act like a complete ass, and to threaten, or at least infer, violence toward a young boy.

What’s most problematic, though, is that the daughter’s exasperation at her father should speak volumes to him, but it apparently doesn’t even register, except to make him think he’s done his job. He doesn’t care what she’s thinking, and apparently believes it’s his job to act as the gatekeeper to his daughter’s body. But is that really what he wants his daughter to think? That she needs his permission before she can allow another person “access” to her body? Dad gets to lay a physical claim on her person, rather than teaching her about proper boundaries and trusting herself?

But dad’s not really thinking about the messages he’s sending his daughter beyond his desire to embarrass her, because he’s too fixated on scaring a boy who’s probably too young and insecure to even seriously be entertaining the thought that he’ll get beyond a slow dance or two and maybe a peck on the cheek.

As young as they seem, though, both kids in the commercial are certainly old enough to be having sexual thoughts. But is dad foolish enough to think that a junior high dance is the most likely place that any actual sexual activity would play out? Doesn’t dad recognize that maybe threatening violence to try and prevent any sexual activity is a sure-fire way to provoke your kids into shame and negative attitudes about sex? Doesn’t dad think that maybe his asinine behavior is projecting the message to his daughter that she is valued most as a sexual object (the exact opposite of what one would hope he is trying to convey) and that her body belongs to the men who lay a claim to it and can defend that claim through violence?

Also, while we’re looking into ideas about stereotypes and messages we’re sending, would this commercial work if the boy in question were, say, an obviously athletic football-player type? Would it make sense for a “jock” to be quaking in the back seat because of an MC Hammer song? Or if the boyfriend was more stereotypically “masculine” would that cause the message to stray into the territory of an actual pissing contest over the daughter, as opposed to the one that is portrayed, where dad has the obvious upper hand? If the boyfriend was more masculine, might the message run off the tracks, with the boyfriend thinking, “Threaten me to keep my hands off your daughter? Or what? Challenge accepted!”

You see, when you try to coerce somebody out of a particular action under the threat of physical violence, you invite the possibility that if that person can best you in a violent contest, then they are allowed to do what it is you were trying to stop in the first place—in this case, putting their hands all over your daughter. So, where does that leave your daughter’s choice in all this? Why is this not a call she gets to make out of the respect she is due as a human being, and based on her own desires? Certainly, any person as young as the girl in the commercial might not be the best at making thoughtful decisions that carefully consider all avenues of concern, but that’s where parenting comes in, which ideally involves providing guidance about things to consider when making important decisions.

And dads who actually think this is funny…why is it funny? How far would you take this? Would you hit a 13-year-old boy? Threaten to hit him? Why is it okay to threaten a boy with music? Putting it that way just sounds weird, doesn’t it?

So, let’s give Buick a new slogan: The 2014 Buick LaCrosse…for dads who are too immature to have an honest conversation about sex with their own children…but are willing to threaten other peoples’ children through the power of song.