I finally watched the ‘reboot’ or ‘re-imagining’ of The Evil Dead ‘. It’s only four years old at this point, proving that this blog is up-to-the-minute timely if nothing else.

I’m sure to some this will sound like an old-man horror-fan rant. And certainly I could probably create an entire blog called “Old Man Horror Fan Rant”, easily generating a post at least every other week based on how often I watch horror films, read horror novels (at least recently and in my teens), and my horror-centered habit, which stretches back to my childhood.

Speaking of habits, that is the big problem at the center of the Evil Dead remake.

I couldn’t care less whether film-makers change the gender or ethnicity of film characters…provided those alterations aren’t playing into stereotypes or other lazy writing/film-making practices, although I have no idea why the main character in the Evil Dead reboot didn’t retain the gender-neutral-tilting-toward-female name Ashley (opting for Mia instead).

That said, I do have issues with current ideas of how to remake horror movies to fit a more “modern” sensibility, with an appeal to audience “sophistication.” For instance, the bland Nightmare on Elm Street reboot, starring Jackie Earle Haley, tried to play up the whole child-molestation angle of Freddy Krueger—essentially draining the original film’s humor, and making it difficult to really get behind Freddy’s imaginative, dream-based murders. Yes, I said “get behind…murders.” Somehow, Freddy ended up being much less entertaining, and much less scary at the same time, by attempting to ground his evil in explicitly exposited child molestation—perhaps because, prior to Nightmare, Haley played a more disturbing and scary child molester in the more real-world movie, Little Children.

Now, as much as I appreciate the inclusion of the original version of The Evil Dead in the pantheon of horror movies, and enjoy the low-budget craftiness and concept of the film, I’ve only ever been a casual fan, largely due to the last third of the film devolving into non-stop witchy cackling, spewing blood, melting faces, and various other forms of jetting viscera and cracking, crumbling bones. 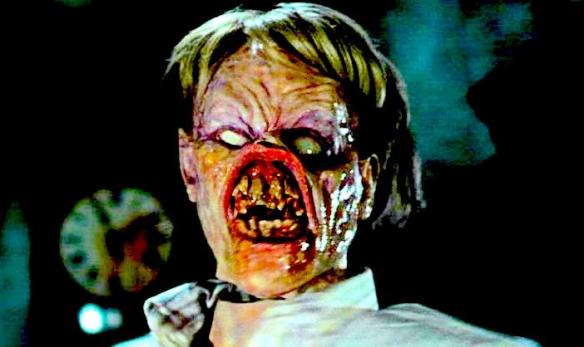 The simple premise of the original film could be characterized as, ‘whoops, our group of five friends tried to have a fun weekend getaway at a rustic rental cabin, but by messing with a book and tapes we found in the basement, accidentally awakened an ancient evil that has trapped us here and is now infesting/killing us all.’

The crafters of the remake decided to add layers of ‘sophistication’, to make the story much more drab and burdensome, so that the premise becomes, ‘our group of five friends, including a brother-sister pair and the brother’s nurse girlfriend have to go to the brother-sister pair’s family cabin where everyone can pitch in to help the sister kick her heroin habit (again), following the brother-sister pair’s mother’s death, and after discovering that somebody set fire to the basement and hung numerous dead cats there, and, whoops, the biggest nerd among us found a book wrapped in barbed wire, that he cut open and started messing with/reading/reciting from, accidentally awakening an ancient evil that trapped us here and is now infesting/killing us all.’

Like with the child-rape angle of the Nightmare on Elm Street remake, the family-cabin/addiction/nurse angle of The Evil Dead remake drains the fun out of the original movie, trying to make cackling, possessed, trap-door-pounding twenty-somethings serious, just-say-no business.

The reboot tries to make heroin addiction a central plot device. Of course, addiction of any sort can certainly be horrific. But the writers/filmmakers here don’t actually commit to the drug abuse as something that is frightening. Rather, they use addiction as part of a hokey empowerment narrative that can best be described as ‘an addict becomes infected with evil because of her idiotic nerd friend and finds the kind of inner strength none of her sober friends/family members have, not only to expel the evil from her own body, but to just plain kick its ass’.

Early on, I thought the addiction might become some kind of clever metaphor for making the kinds of errors in judgment that lead to evil infesting one’s body, that there might be some wild, conceptual departure from the original film. But that hope was quickly shattered. The addiction of one among them just becomes an excuse for everybody else in the party to dismiss whatever the addict says/feels, and to engage in all manner of their own irrational behavior and stupid decisions.

Beyond the already-mentioned foolishness of the nerd cutting barbed wire so he can peruse the contents of a book bound in flesh that he found in the basement of the addict’s family cabin, along with numerous hanging dead cats, and evidence of a deliberately set fire—things that everyone in the group, with essentially no discussion, decides are not as concerning as the heroin habit of one of their party—we also have a nurse among the group who apparently stole equipment and medications from her job in order to treat someone in withdrawal. Either that, or we are supposed to believe that the use of these tools/substances, ”the same treatment she would get in a hospital”, was approved by her bosses.

‘Sure, Olivia, we always encourage our staff to treat withdrawal in their off hours.  Take whatever you need. Just make sure to dispose of the hypodermic needles properly!’

And did I mention that this group of friends apparently isn’t all that alarmed at finding hanging dead cats in a basement where a fire was set? Is that the kind of thing anybody sees without being concerned about who may have been there, and who might come back anytime—especially given that they left a flesh-bound, barbed-wire-wrapped book full of disturbing illustrations and ancient incantations down there? And why on earth would those people have left the book there? At least in the original, we recognize that the people who left the book and the recordings were already taken by the evil.

It’s also confounding that in the midst of all this modernizing and sophisticating, the film-makers didn’t think to remove or alter the tree-rape scene to where it was, maybe, not a rape scene. Certainly, childish fan-boys would have been upset at such an omission, but they were probably already upset at having a female protagonist anyway–a protagonist who is both an addict, and the victim of rape by tree roots.

In the end, the remake is most disappointing not just because it doesn’t improve on the original in any identifiable way, aside from maybe its special effects, and, well, better acting. It is most disappointing because it treats addiction as a pointless plot device. As much as addiction is treated as a central element of the movie’s set-up, the writers have nothing original to say about addiction, or even anything unoriginal that might lend some weight or authenticity to the story, except maybe that the family members and friends of addicts get completely stupid when trying to get the addicts to ‘kick’. But I’m guessing that’s not the intended message.

Horror movies tend to be most effective when they are simplest (dead return to life and begin eating the living, giant shark terrorizes coastal town, teens stumble upon the isolated home of a murderous family, young people visit a cabin where they accidentally awaken an ancient evil); or when there are clever concepts or twists on expectations (a puzzle box releases evil beings from hell, murdered child murderer invades the dreams of his killer’s children, the therapist is really dead, time-travelling jet engine fails to kill teen who kills teen in a rabbit costume…ok, maybe I shouldn’t try to explain that one here).

But when horror movies (or any movies) try to introduce “real world” problems as nothing more than a plot device, they risk ruining fantastical or otherwise functional concepts with movie-of-the-week blandness and clichés, which is exactly what the reboot of The Evil Dead does—shoves weak “recovery” and “intervention” ideas in the middle of an otherwise simple, effective, and scary idea, making addiction just some dumb excuse for other dumb things that happen, and happen more pointlessly than they would have if the addiction angle had been left out.

And, if you want to get right down to it, the movie blames the addiction problem of one character for killing all of her friends by making them commit to staying in a cabin infused with evil…even though it’s really the nerd toying with a book that kills everybody. And that’s a burden the nerd should bear…but he’s dead, and the addict is alive. How do you think that’s gonna work out?