A friend of mine recently turned me onto James Sama, a guy who, under the banner of “New Chivalry,” writes relationship advice, despite apparently having zero training in any relevant field and having nothing particularly original to say. Sama trades in stereotypes, and vague generalities, while somehow convincing people that his advice is just dandy and somehow forward-thinking.

Here’s one of his latest, which was featured on Huffington Post: 12 Stereotypes Labeled “Strong” to Hide the Blatant Sexism Involved

Sama has become a minor media figure and gotten over 30 million hits on his blog in about a year-and-a-half (his claim), which apparently qualifies him as a relationship expert. Have I mentioned that Sama has never been married and doesn’t get into a whole lot of discussion about how his amazing insight into relationships has personally made his own relationship(s) better?

Don’t get me wrong.  Sama’s not alone in the advice-peddling-with-no-credentials field.  Still, this all got me to thinking that maybe I could follow his business model—giving fortune-cookie-style relationship advice, presented in “list articles” about how this or that stereotypical thing is the key to a solid relationship. So, with the misplaced confidence and lack of thought that is often necessary to self-promotion, I present 8 pieces of relationship advice I just pulled out of my ass.

Okay, okay—so I got this from somewhere else. I don’t really remember where. But until you can be okay, and know that everybody else is okay, you’re not going to have a good relationship. Or even an okay relationship. Okay?

We’ve all heard it a million times—you can’t love anybody else until you’ve learned to love yourself. This is true enough. But, seriously, none of us love ourselves all that much, unless we are lacking in basic self-awareness. I mean, you know everything you think and do! And a lot of that is just plain unforgivable. Just know that you don’t really love yourself, and so you’re probably incapable of loving anyone else fully. But the great thing is that your partner is in the same boat. You don’t really think anybody who loves her/himself would actually waste her/his time on someone like you; do you?

Relationship experts know that people in relationships are going to get mad at each other. It happens. Sometimes it happens a lot. When your partner gets mad at you, just recognize that it’s probably because your partner did something really dumb and is just taking it out on you. Knowing that it’s not your fault means you can accept responsibility for whatever the argument is about, while not really having to feel too bad about it. Everybody can move on a little quicker that way.

Following from the previous advice point, we all know that the main goal in any relationship is to keep conflict to a minimum. When your partner is mad at you, if you can listen to their complaint just enough to agree with what they are saying, and prove you were at least sort of paying attention by making a semi-relevant apology for whatever that is, they’ll start to feel better and quit climbing up your ass. And remember, it’s not really your fault anyway. Your partner is just mad at her/himself. 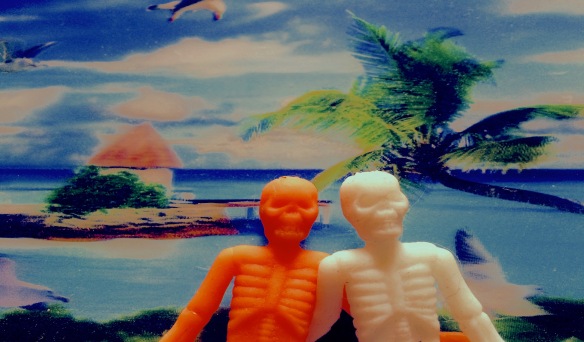 Stock photos of happy and/or upset couples just aren’t fun–but a rubber skeleton couple on vacation in an island paradise, possibly being swarmed by gulls…

Sometimes just agreeing and taking the blame isn’t going to fix an argument. Sometimes you have to promise to never again do whatever made your partner so upset in the first place. Again, since your partner is really just mad at her/himself, it’s really no skin off your teeth, or sweat off your brow, or whatever things come off of you when you’re stressed and having to put forth some effort.

Right now, I’m talking about your ‘negative promises’—you know, the promises that you won’t do something again. Positive promises—like, ‘I’ll pick up after myself’, or ‘I’m totally saving up so we can go to Hawaii’—are for another article entirely. Although, now that I think about it, I suppose those positive promises could be negatives, too—like ‘I’ll never leave my dirty clothes all over the bathroom/bedroom floor again’ or ‘I’ll never waste my money on video games again, so that we can maybe one day have enough money to actually take a nice vacation.’ Anyway, the point is, you can only promise never to do something again so many times before your partner catches on, and realizes you are doing that thing—again! Or perhaps–still!

This is pretty much an obligatory point to make. Nobody’s relationship is perfect all the time. And when there are problems, nobody’s relationship just fixes itself. You have to put in some work. That work should ideally be fun—because arguing can really be a lot of fun if you know how to do it right. And it’s especially fun when you win.

Another obligatory point. I know I just said it’s fun to win arguments. But, really, that’s not the point. I mean, if you were paying attention to the rest of the things I wrote here, you’d realize that I was telling you how to avoid arguments, or to just give up and let the other person win, so that the argument might just end and you can avoid doing any meaningful work toward understanding your partner, or improving your relationship.

Author’s note: Gee whiz, that was fun! I was afraid that having been trained as a counselor, and having been married for over two decades might have hindered me in advancing some pointless advice. But, since I’m not actually trained as a marriage and family therapist, and my marriage is—well, a marriage that exists in the real world—I was able to cobble some stuff together that sounds pretty good, actually. Plus, laying it out in short, numbered points meant that I didn’t have to actually put together a cogent argument.

Now if some of you can help out by sharing this around, or maybe getting it to the attention of “media outlets” I should be well on my way to 30-million blog hits, and solid status as a relationship guru.  Thanks!