I still enjoy Good Will Hunting. Along with a fun romantic comedy, it involves an entertaining dramatic representation of therapy—emphasis on dramatic. I mean, therapist Sean Maguire chokes client Will Hunting in their first ever session, FFS. Despite what the filmmakers would have us believe, this is not a valid technique for establishing rapport or ensuring appropriate transference with clients who have suffered abuse–even when therapist and client are both from south Boston and the client just shit-talked the therapist’s dead wife.

Choking one’s client out is, perhaps, an overly dramatic example of countertransference, Will standing in for anyone who ever questioned Sean’s path in life. But in this instance, it’s used to contrast Sean with the other stereotypically bland, wimpy therapists Will is introduced to—George Plimpton as a self-aggrandizing stuffed shirt of a psychologist/author, who readily succumbs to Will’s mock-flattery, and then is horribly offended when Will calls him out as being gay and closeted; and a hypnotist, who is similarly offended when Will, pretending to be under the throes of hypnosis, begins describing sexual abuse as if suppressed memories are rising to the surface, only to begin reciting the lyrics to, then singing, Afternoon Delight. 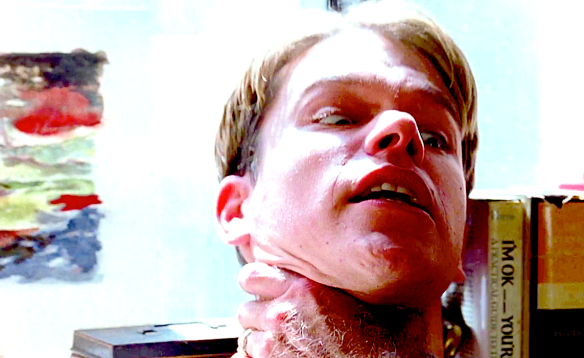 Sean is a different kind of therapist, though. Sean is a manly therapist. Sean lifts weights. Sean is a Vietnam Veteran. Sean is a hard drinker. Sean jabs back at Will’s, snidely well-read comments with a mix of self-deprecation and equally snide rejoinders. That is, until Will crosses the line, and Sean throws Will up against the wall of his office and threatens to “end” him. Getting through to Will is going to take a tough guy therapist. Someone Will can identify with. Someone who has no qualms about using physical violence to break the ice with a client who has suffered a childhood of abuse at the hands of, from what little we hear about it, hard-drinking tough guys.

It’s somewhat odd that nobody thinks to see how Will might respond to a female therapist, given that women greatly outnumber men in the therapy field. Gerry Lambeau, Sean’s college roommate, now math professor intent on harnessing Will’s genius, says he approached five therapists with Will before settling on Sean as a last resort. But if there were women among them, we don’t see them. In fact, we don’t really see any women in this film, aside from Skylar, Will’s love interest. Beyond Skylar, the only other woman in the movie is in the form of Sean’s memories of his sleep-farting wife.

Even more odd is that we don’t learn anything much about Will during the therapy sessions. We hear a great deal about Sean’s wife, how he met her, how that connects to a super-important baseball game, her “imperfections”, and how she died. We learn about Sean watching a friend die in combat. We learn about places Sean has traveled.

Until the second-to-last therapy session, Will doesn’t do much, except tell a joke, crack wise, and listen as Sean accuses will of being a chickensh*t little boy who doesn’t know anything about the world, or love. We hear more about Will’s past in one serious conversation he has with Skylar than in all his therapy sessions.

On top of that, Skylar is the only real thing Will ever talks about—but only in one therapy session—or two, if you count the one where he mentions that he broke up with her. Also, Will admits to having been abused in that second-to-last therapy session, but saves most of those details for his serious talk with Skylar.

I suppose much of the impetus behind Robin Williams’ portrayal of a monologuing therapist is some bland idea about the therapy with Will being therapeutic for the therapist, who has checked out of his previously brilliant professional life to teach psych to barely engaged students at Bunker Hill Community College. But the idea that’s conveyed about therapy is that the therapist can drone on about her/his personal life, then challenge the client to change behaviors and attitudes, and that will inspire the client to heal her/his own (similar) conflicts. This is not how therapy works. In fact, I would guess that most people would get more than a little annoyed at a therapist telling personal stories in order to point out how much more s/he’s experienced in life than the client.

Of course, it would make sense that Will would be content to let a therapist run his mouth while Will sits in silence, since Will doesn’t feel he needs therapy, and is only meeting with Sean to satisfy a legal arrangement Lambeau put in place to get Will out of jail. Having dealt with plenty of people in court-mandated therapy, I can say Will’s resistance to engaging in therapy was probably the most realistic aspect of the film.

Still, despite his almost complete lack of engagement with the therapeutic process, Will achieves a “breakthrough” near the end of therapy, all in the space of one session where Sean speaks of his own history of abuse, tells Will repeatedly, “It’s not your fault”, then initiates a hug with Will. Of course, Will then becomes a sobbing mess.  A sobbing mess who is, after all these years, healed. 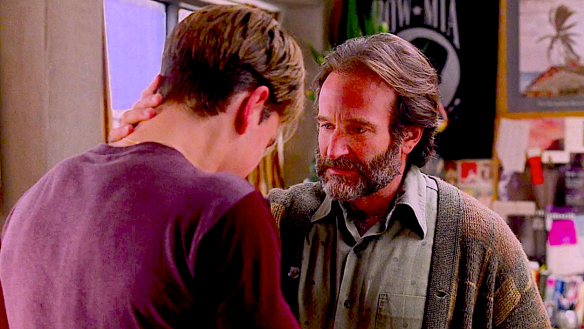 Good Will Hugging…or, rather, Good Will on the Verge of Hugging.

Sean spells out the idea of such breakthroughs in a lecture he gives to his disinterested community college students in his introductory scene, stating that breakthroughs come from trust built between therapist and client. But because of the way the story plays out, we are presented with the idea that the key to the therapeutic process is therapists sharing their own personal histories, opening up to clients in an astounding absence of professional boundaries. Through such sharing by counselors, along with presenting a few (largely unanswered) challenges to clients, the film suggests that clients will come to a point where everything becomes clear, emotions spill out, the client can go get a high-paying job as a corporate mathematician, and then run off to win back the potential love of said client’s life.

All this because if there’s one thing Hollywood likes to tell us about therapy, it’s that everything falls into place once a person has a moment of emotional catharsis.

Yes, Will’s attachment disorder and fear of abandonment, which Will diagnoses himself (or perhaps, repeats from earlier encounters with therapists in the Foster Care system?) is magically overcome by being a wiseass for several sessions, listening to Sean tell deeply personal stories, and then engaging in a hug with his therapist.

In a sort of defense of the lack of realism in the depiction of the therapy, Will does point out to Sean that, “You f*ckin’ talk more than any other shrink I seen in my life.” To which, Sean replies, “I teach this sh*t, I didn’t say I know how to do it.” Unfortunately, as a defense it is pretty weak. The movie still shows that even poorly-executed therapy gets impressive results, that therapists just have to be a friend to their clients—Will even tells Sean “I thought we were friends” in a scene where Sean kicks him out of his office for resorting to sarcasm in the face of Sean’s questions about what Will wants to do with his life—the only instance of Sean setting any kind of boundaries with Will.

In short, Sean mirrors a lot of the bad behaviors of other adults in Will’s past—aggression, threats, a lack of boundaries, mixed messages, and frequent insults—and it works to heal what those same behaviors, and a heap of violence and abandonment, broke in Will.

Ah, the magic of Hollywood therapy.

And now…one final note about Good Will Hunting–Elliott Smith’s song “Miss Misery” is infinitely better than that terrible, overblown Celine Dion cliché-fest “My Heart Will Go On”—which beat out “Miss Misery” for the Oscar all those years ago, and continues to torture all of us in grocery stores and waiting rooms on a near-daily basis.

Don’t believe me?  Then listen to this…